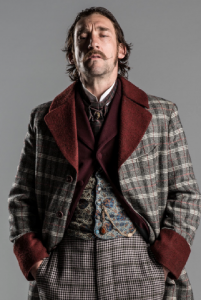 Ten years an Inspector on the Hong Kong police force, Shine has used that experience to exert a firm grip over Limehouse’s neighbouring ‘K’ Division and the emergent Chinatown that grows within it.

An officer both feared and respected by all, he is, however, a man obsessed by his own power and will. A will that has corrupted him and, if he has his way, will corrupt all and everything that falls within his reach.

As such, he is Reid’s amoral nemesis. Where Reid is restricted by both the law and morality, Shine suffers no such restriction. If Reid cannot find the resources to defeat him, Shine is a monster that might swallow his whole world.

The above extract was taken from the official Ripper Street II press pack. My sincere thanks to Tiger Aspect for providing me with publicity and promotional materials.