Ladies and gentlemen, I would ask you now to give your full attention to the voice of gaiety – Miss Charlene McKenna…

QUEEN OF THE COSTERS

Damian: Before we address Ripper business, congratulations on the award-winning production of Richard Eyre’s version of Henrik Ibsen’s Ghosts. Indeed, the production was so successful that you not only took Ghosts to the West End, but I understand you’re also heading for the bright lights of Broadway?

Charlene: Aw, thank you Damian. We are going off Broadway to BAM, which is a very very cool theatre indeed and we are super excited to pick the show up again.

Damian: Life does seem to be imitating art! Of course Rose Erskine wasn’t always the toast of the town and indeed when we first met her she was one of Long Susan’s ladies working Tenter Street. Nonetheless, by the fifth episode of series one (The Weight of One Man’s Heart written by Toby Finlay), Rose confides in Drake and tells him of her dream to banish the dark world of prostitution and escape into the limelight of the stage. However, towards the end of the second series, and despite her noble dreams and aspirations, Rose is at the very bottom of the playbill appearing at Blewett’s Theatre of Varieties singing like a reed caught in a March gale with lyrics such as “Randy-pandy, sugardy candy. Buy me some almond rock”. In spite of this, and with a little help from a certain friend, Rose transforms into the voice of gaiety and four years later as series three begins, Queen of the Costers! Where would Rose be in 1894 without Long Susan?

Charlene: Long Susan and Rose have always had a good relationship, she (L.S) has always tried to do right by Rose, and she definitely gave her the kick start she needed, which was an incredibly rare thing to get in those days, so there’s always been a great bond between them which makes what happens in season three all the more harder for Rose to stomach. As to where Rose would be without her? I’m fairly sure Rose would still have made it because she’s very streetwise after her experiences in the brothel and around the hard back alleys of East London, she doesn’t quit, and she won’t settle so i think she would have fought tooth and nail to get herself a better life. 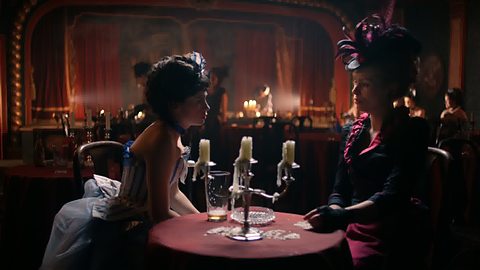 “All my days, all of them, whatever happens, I will always be grateful to you.”

– Rose to Long Susan in Our Betrayal (Written by series creator, Richard Warlow)

Damian: Inevitably we must discuss another of Rose’s guardian angels. I found the scenes centered around Rose and Drake at the conclusion of the last series to be profoundly moving and her loyalty to him truly heartbreaking: (Rose to Inspector Reid) “I search for Bennet Drake. There’s twice, sir, I owe my life to him. I walk this way twice a day and will stop only once I have found him. I cannot forsake him.” Drake missed Rose’s first bravo performance at Blewett’s but is there hope that she may sing for him yet?

Charlene: To live in Rose’s head is to always have hope. So yes, there is indeed hope she will sing for him yet. That quote proves my last statement, which is that no matter what it is, Rose will not fold easily, she’s like a dog with a bone, when she has decided she wants a certain thing she goes after it with all her heart. 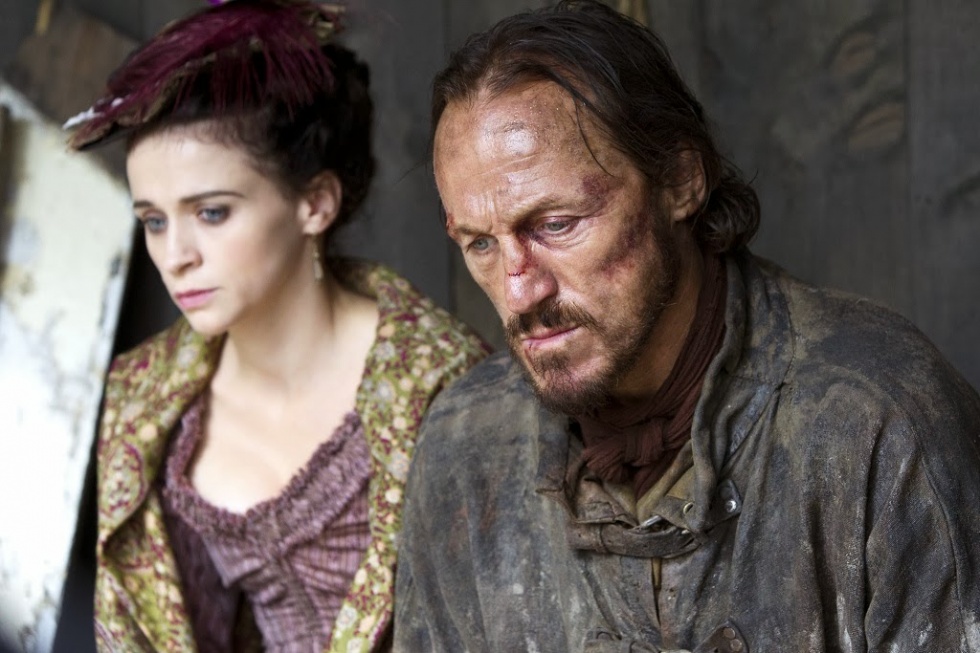 Damian: It may not have been a passionate relationship in the past but it strikes me as something much more paramount than that, perhaps a more consistent, steadfast and enduring kind of love. How would you describe the relationship between Rose and Drake in series three from her perspective?

Charlene: Well this is a little hard to answer without giving it all away. There has been six years from when we first saw Rose to when we see her now. She has done a hell of a lot of life in those years, she has been the victim of some very dark crimes and also has been privy to many of the finer things life in the late 1800s had to offer. She has done a hell of a growing up. So she sees Drake much differently now that she did when he first asked for her hand. So I think while their relationship is built on much more than passion, that passion is there now burning all the deeper for having missed it all these years. And that is where their love is at now in season three. 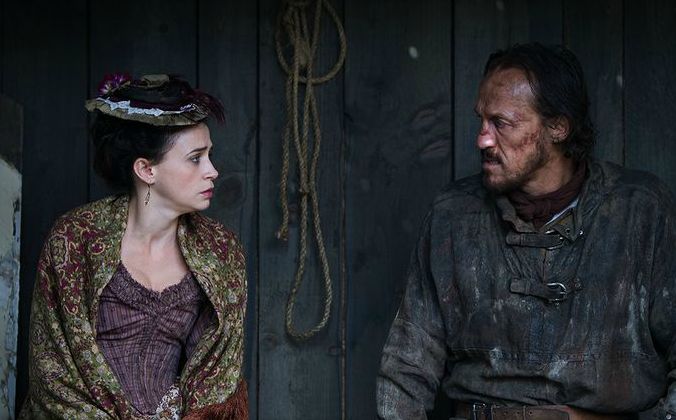 “I am your true friend. I know that I have been cruel to you in the past. And you must look at me now and see nothing but a reminder of your pain. But I am your friend and I will not desert you. So you go back to your graves and your dosshouses, and you be sure of this: As the day begins and the night ends, you will find me waiting for you.” *

Damian: Jerome Flynn was deservedly BAFTA-nominated for his outstanding performance in series two and I personally think you should have received a nomination for best supporting actress yourself. Quite apart from Richard Warlow’s epic scripts and often poetic dialogue, I’m wondering how as an actor, you approach scenes with so much intensity and raw emotion as those at the graveyard (RS2: 07) with such subtlety and sensitivity and yet make them dramatic. Presumably you rehearse and discuss scenes such as this with Jerome and the director (Andy Wilson) but can you please describe your journey from reading the script right up to the point of filming?

Charlene: I’m blushing. Thank you Damian. You know what sometimes we do talk it out and sometimes we just do it. I never like to be over rehearsed or rigid in my choices because it makes me less malleable to the changes that the other person may bring to the scene. So I never want to be locked in my own ideas and decisions. I like to know my lines obviously and have thought about it and then I like to go to set and see what the rest of the team are bringing. Then for me it comes down to instinct and how it feels. 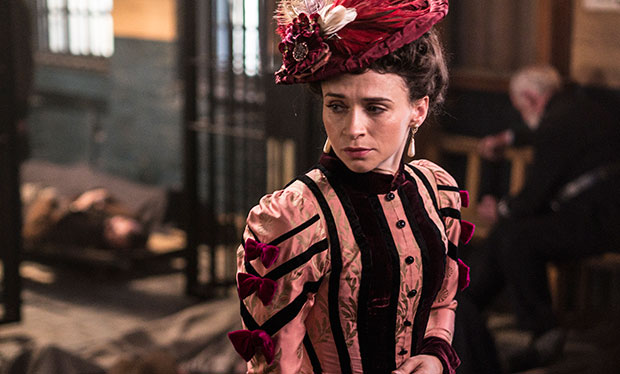 Damian: In our previous interview you described Rose as “chasing a dime losing a treasure” with reference to Drake. Series 3 sees Rose engaged to Edgar Morton, the proprietor of the music hall. However, there was a line from Rose in the aforementioned episode, “Miss Susan, I have never known what it is to lie with a man I love” – I’m curious if this still remains true?

Charlene: There are different types of love. Lets just say, the love she was referring to in that line above, at the start of season three, remains true. You can draw your own conclusions.

Damian: Thank you Charlene. All that remains is for me to wish you well on Broadway but please don’t wander off with any strange Americans…

Charlene: I really will try – might go see if I can find Jackson someplace!! thank you Damian, pleasure as always. And a quick, HUGE thank you to all the fans who petitioned to have Ripper Street brought back. I think we have made a great season three for you all. Hope you enjoy.

*The full quote deserves to be read in its entirety owing to its beauty and grace:

“You think you can hide from life and perhaps another man might… but not a man such as you, Bennet Drake. You believe yourself cursed. You are not. You believe you carry only pain into other people’s lives – you do not. Bennet, you brought love into mine. A love that is keener now than ever it was. You are a good man. You are a good man. I will say those words until the day I die. Bennet Drake is the best of men and this life, this world, will not let him sink from its surface.”