A TALE OF TWO CITIES:

FROM VOLANTIS TO WHITECHAPEL

DAMIAN: They say it’s a small world Eddie. Well, Ireland must be tiny because it seems as though the moment an actor finishes their work on Game of Thrones, they quickly change costumes and then wander over to the set of Ripper Street – or vise versa! What’s going on Eddie?

EDDIE: Well, Ireland is a small place and you always know someone who knows someone. On the production side of things it’s great that our country attracts so many projects to both the south and the north. Hopefully that won’t change anytime soon. It wasn’t that quick of a turn over, I filmed my first scene for Game of Thrones in September in Belfast, my second scene in Almeria, Spain in October, and I didn’t film Ripper Street till February the following year. I did however audition for them both in the same week. Though I didn’t audition for the part of Mr. Sparks that I ended up playing in Ripper street.

DAMIAN: You’ve got some exciting projects coming up including a new TV series and a horror film. What can you tell me about them?

EDDIE: Yes, I am looking forward to seeing them both. The TV series is Acceptable Risk which will be aired here in autumn. I was delighted when I got the part because it was the first time on a big production that I was playing a character that helps drive the narrative. It was great to work on because it’s really a crime drama driven by female leads and I had such a fun time working with them all. Working with actors like Elaine Cassidy, Lisa Dwyer Hogg and Angeline Ball was a great learning experience. I also got on very well with the director, Kenny Glenaan, which made the step up easier. 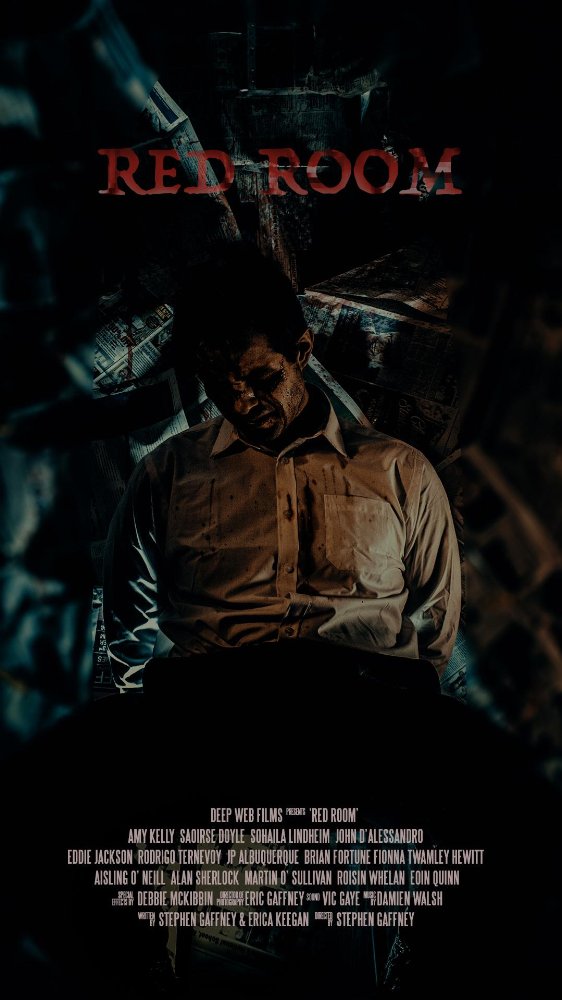 The horror film is Red Room, directed by Stephen Gaffney, along the lines of Saw or Hostel. It has a great ensemble cast, but too many to name them all without feeling bad if I left one out. But Brian Fortune was one name that made me more excited about the project. I had been a big admirer of Brian for a long time and got to work with him a few years back on a short film, since then we have become good mates, but never got another chance to work together. Not that we share much screen time in this. We are writing a feature together to make sure that happens soon though.

DAMIAN: And I’m particularly interested in The Man Who Invented Christmas. The film tells the story of how Charles Dickens wrote A Christmas Carol but doesn’t it also feature characters from the book?

EDDIE: Yes it does, from the scenes I have seen it looks great. It brings to life a few characters from the book itself. So I was playing one of those characters along with Marcus Lamb and Michael Judd, who are both also based here in Ireland. Most others were flown in, so it was great to get the part. Especially since it was just before Christmas, not much work goes on then unless you do Panto. 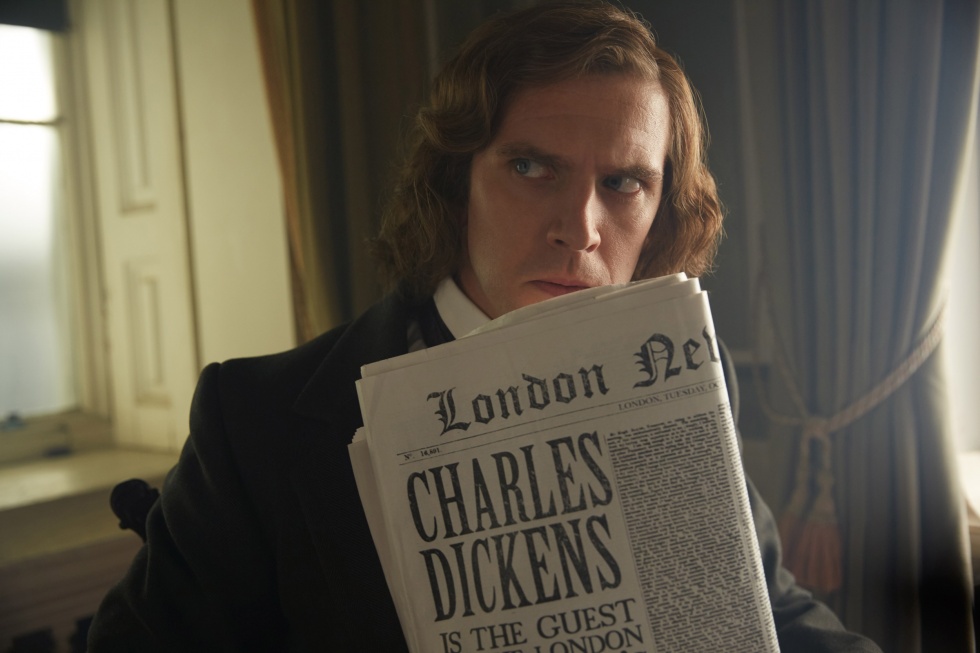 Fresh from his success as the Beast in Disney’s live action Beauty and the Beast, Downton Abbey’s Dan Stevens as Dickens in The Man Who Invented Christmas

DAMIAN: And it’s an impressive cast you’re performing alongside isn’t it? The great Christopher Plummer plays Scrooge, Dan Stevens as Dickens, fellow Game of Thrones alumni Jonathan Pryce (Dickens’ father) and Donald Sumpter (Jacob Marley), not too mention Dickens’ stalwarts Simon Callow and Miriam Margolyes. Can you describe what it was like working with such a prestigious cast?

EDDIE: Well I only got to work with Christopher and Dan but it was an amazing five days on set. I took it as a massive chance to learn from one of the greats, although most people know him from The Sound of Music, I knew him more from The Beginners which is one of my favourite films. I don’t know a lot of younger actors so I wasn’t sure who Dan was, though once I saw his face I remembered I had seen him in The Guest which was an amazing film. I am not really one to get star struck or whatever you might call it, I realized that when I got a chance to work with David Wilmot a few years ago, who is also in Ripper Street [as Artherton]. I’ve had huge respect for him as an actor for many years. I guess it depends on the person though and how they treat you, I’ve been very lucky so far. But yeah, on that film it was the same as any other set, actors sitting around chatting between takes. 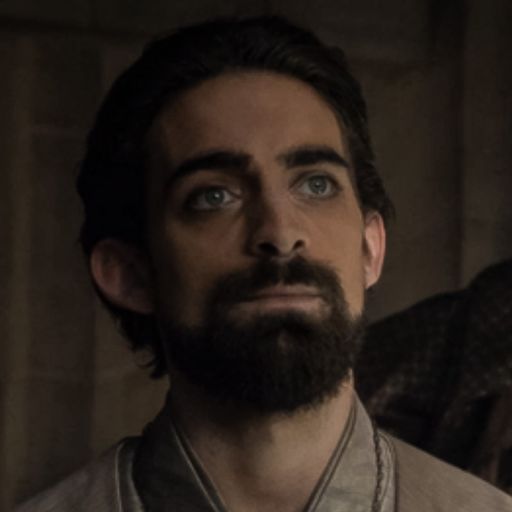 DAMIAN: Most readers will probably recognize you from Game of Thrones in which you played slave master Belicho Paenymion. I don’t know if you’re the sort of actor who still gets a little nervous as they start work on a new project but is there a kind of added pressure when working on such a celebrated and epic series such as this?

EDDIE: Well I was already a big fan of the show. I had an audition with Carla Stronge in Dublin on a Wednesday, found out I got the part on the Friday and was in Belfast on set on Monday, so to be honest I didn’t have much time to think. In terms of production, it was the biggest project I had worked on to date, but once again, everyone was so friendly it made me relax and be able to enjoy it more. I don’t get nervous about the project or the people in the project but more about the choices you make for the character, I guess. Even after you’re done you question that, but it’s not the same thing as nerves, I think every actor does that. 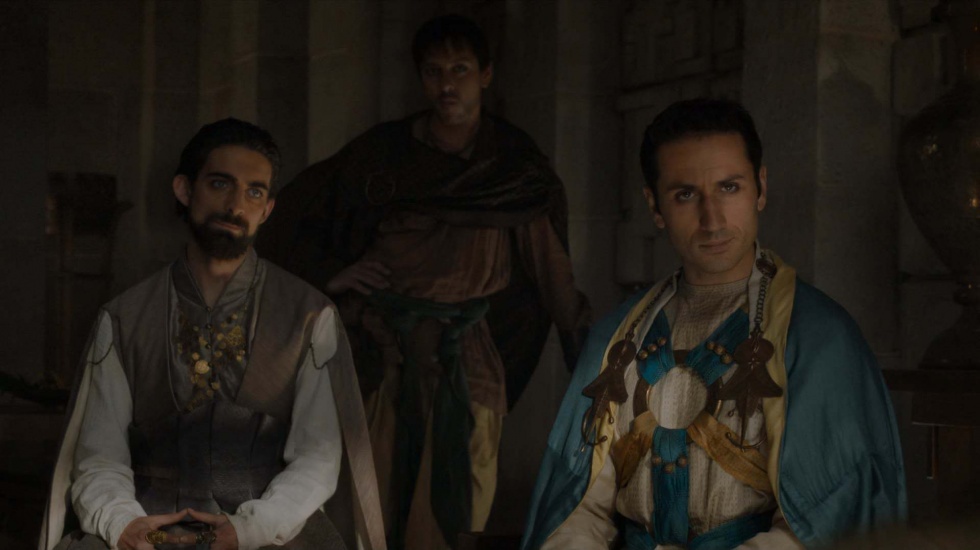 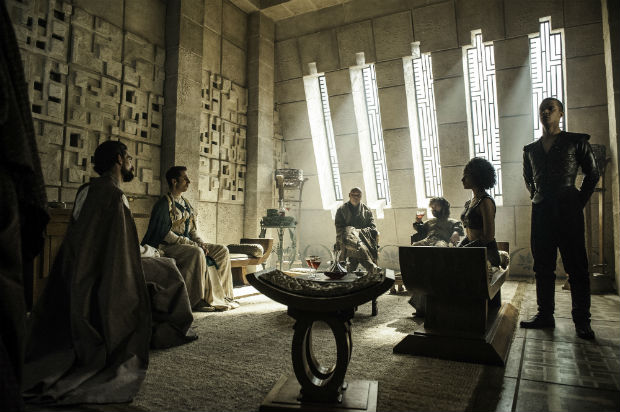 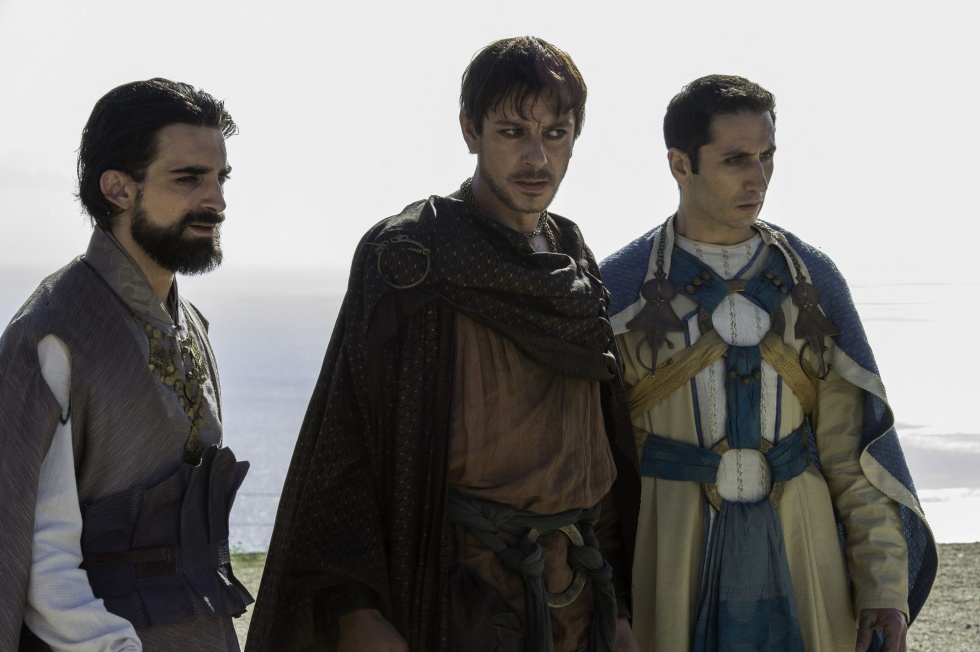 DAMIAN: So, let’s talk about Ripper Street. Can you tell me a little bit about the character in the second episode A Brittle Thread?

EDDIE: I play Mr. Sparks who is a bit of a hustler. He sells exotic animals that he has collected from his travels around the world. It’s kinda hard to talk much more about the character in case I give anything away. But he does seem like the kind of character I would love a chance to expand more.

DAMIAN: I interviewed production designer Stephen Daly and if the sheer spectacle of the stunning sets weren’t enough to impress on screen, his description of the work that he puts into making it all look so authentic is just mind boggling. Tell me about your first day on set.

EDDIE: I’d say I got there about six in the morning. I probably just ate a banana or something small, I usually try to eat before I leave for set. You don’t know if you will have enough time to sit down and eat when you get there. No point in getting hot food, as any minute you could get called to hair and makeup and I don’t think I could eat a cold fry-up after, plus I like to soak my porridge overnight!

I always like to run through my lines and do all the checks before I start. I was in a good mood. I had been cast in Thrones, Reign and then to be cast in Ripper Street on the back of them was exciting.

I got lucky because the set I was on was Mr. Sparks shop, so that can tell you a lot about the character. There were exotic animals like llamas, monkeys and parrots everywhere. I am a massive fan of David Attenborough so I loved the moments between takes to get a chance to look as these animals up close.

But the set was great, I got a chance to work with some great production designers over the last few years and this was right up there with them. The people like Stephen behind the scene don’t get enough credit for the passion and commitment they put into these sets. They are the first to arrive and last to leave. The attention to detail amazes me every time. Just hope I get to work on more of his sets in the future. 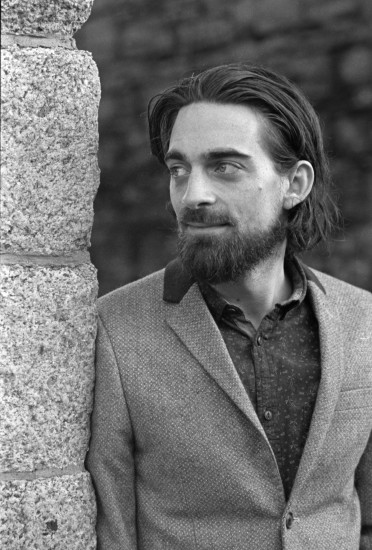 DAMIAN: What can you tell us about getting into the character of Mr. Sparks?

EDDIE: Well I think when you are playing a smaller character and only see the scenes you’re in, the costume and makeup department can give you a lot of ideas about how the character fits into the world, they tell you a lot about how the director wants the character visually portrayed. Which can give you more material to work with. Sometimes seeing the costume or makeup can change some ideas you had. But I was happy to be wearing trousers this time.

Killian Scott [Augustus Dove] who I’m in the scene with, I’d seen in LOVE/HATE and was a gent as he wouldn’t have known me at the time, but made sure I was comfortable and had enough room to move when the table had to be moved back for the camera, even though we didn’t spend much time together it told me a lot about the kind of person he is.

There’s always a lot of rushing about on productions like this and you get used to someone coming up and pulling at your hair, or brushing fibres off or touching up your make up. Also when you’re only on set for a day and show up in the morning and are introduced to thirty people, I get nervous I won’t remember all the names. But I am getting better. 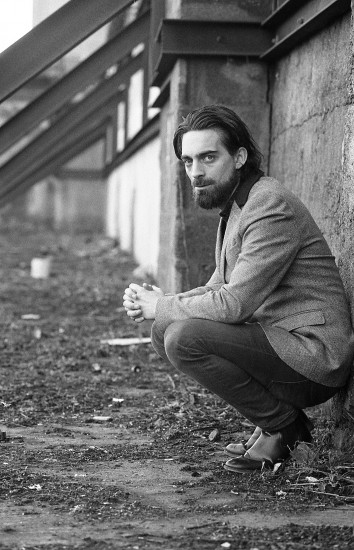 DAMIAN: Describe working with the director Daniel Nettheim and the filming of your scenes.

EDDIE: Daniel was nice to work with, he just gave me an idea of who Sparks was. When you’re playing a character in just one or two scenes it is more important to me that you lend yourself to the overall theme or if your character interacts with one of the main characters that you lend yourself to their arch. In fact in these situations it’s nearly better if the director doesn’t have to say much to you at all, it means you’re already doing what they want. I would be more worried if he was talking to me at length but it was an exchange between myself and Killian and I can’t really say much about it without spoiling it, to be honest. We did have to record the dialogue again without some of the animals around as I think it was hard to shoot soundwise.

DAMIAN: Eddie, I look forward to seeing you in Monday’s episode and all your future projects – very best of luck with them. Cheers.

EDDIE: Nice one Damian. Thanks for the chat.