DAMIAN: Hello Gillian, it’s lovely to catch up with you again. It’s been a few years now since our RIPPER STREET interview, what have you been up to since?

GILLIAN: I really can’t believe it’s been so long! Goodness, quite a bit has gone on since then. More of the same really; more TV, a lot more stage work. And a lot of singing too. I hope I’ve come on somewhat since RIPPER STREET which was my first ever job and a wonderful place to learn the ropes. I’ve got a long way to go, mind! I’ve got a lot to learn still.

DAMIAN: [RIPPER STREET SERIES 2 SPOILER ALERT!] You were obviously thrilled to be asked back for the second series of RIPPER STREET but then they killed your character off, did you know Bella’s fate as you signed up to return or was it something of a unpleasant surprise?

GILLIAN: I was really surprised to be asked back. As far as I knew, I was only signed up for a guest role, so it was really wonderful that the writers decided to extend my character’s storyline. I knew that something was going to happen to Bella. That was part of the deal when I signed on. But I didn’t know what it would be or when. I think I found out while we were shooting the previous episode. So a bit of a surprise! That said, it was a pretty cool way to leave and Toby Finlay is a brilliant writer so I was glad to leave in one of his episodes.

DAMIAN: Curiously, when I asked you about your research for RIPPER STREET and the episode A STRONGER LOVING WORLD in particular which featured spiritualism and the occult, you told me that you read all about the friendship between Arthur Conan Doyle and Harry Houdini. A couple of years later and you’re appearing in the HOUDINI & DOYLE TV series – how strange is that?

GILLIAN: I know! How strange is that?! It was fate. I actually worked with another ENDEAVOUR director on that – Ed Bazalgette. Maybe you’re my lucky charm. I should talk ideas with you more often.

DAMIAN: I am your lucky charm and absolutely anytime. So, continuing the trend for appearing in TV shows that I like, tonight you’ll be appearing in ENDEAVOUR. How did you come to be involved?

GILLIAN: The usual way. I’d met the Mammoth Screen team for a couple of other projects. I came in and auditioned for Ashley Pearce (director) and Helen Ziegler (producer). I’ve been a fan of ENDEAVOUR since I saw the first film while I was still at drama school. And I think Shaun Evans is brilliant, so when I was offered a role I jumped at the chance.

DAMIAN: What can you tell us about tonight’s episode GAME?

GILLIAN: I don’t want to give away too much. It’s about a bunch of academics who are in the process of creating a chess-playing machine, and in the lead up to the machine’s important debut tournament with a Russian chess pro one of the team goes missing.

DAMIAN: And something about the character that you play, Dr. Patricia Amory?

GILLIAN: I play one of the academics. My father is a pioneer in the industry and I’m trying to find my place as a young female academic in a male dominated world. The loss of Richard hits her really hard. It was a really fun role to play, in part because the team was so great. The other actors were all fantastic, and I’m sure as many of the ENDEAVOUR cast and crew say, the atmosphere on set is brilliant, and I’m still friends with a fair few of the company. Plus James Laurenson, who played my father, is so experienced. It was wonderful to watch him work.

DAMIAN: Gillian, it’s an absolute pleasure as always – thank you very much indeed.

GILLIAN: And you! I wonder when we shall cross paths again. Happy New Year! 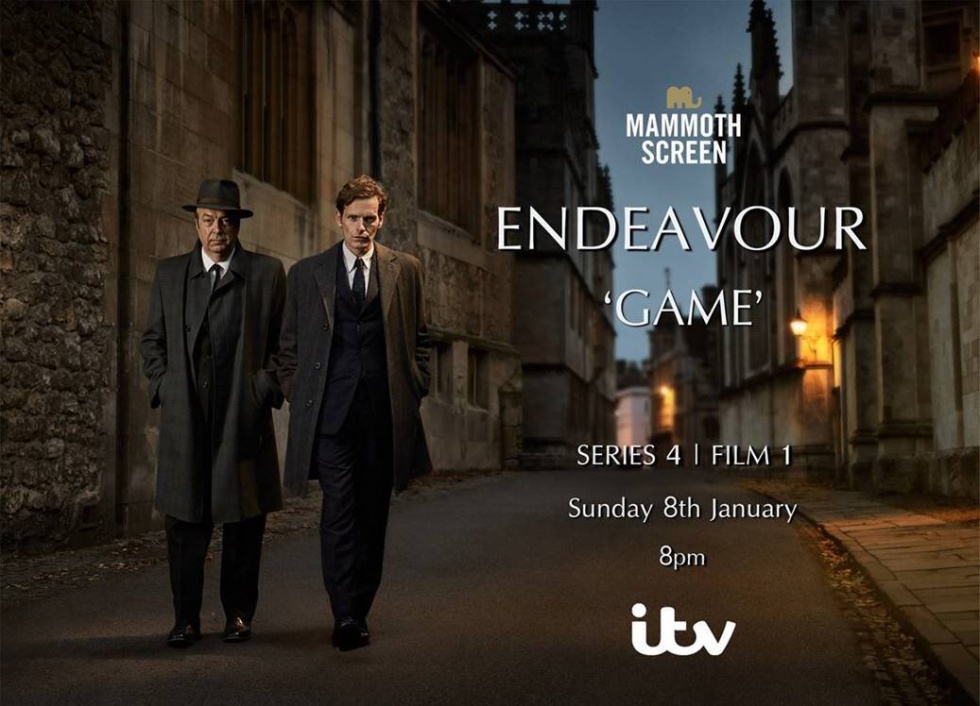