18 – 27 September, Theatre at the Mill, Belfast prior to UK tour

Writer and historian Damian Michael Barcroft previews an innovative new theatre production using multiple cameras, backing screens, projections, surround sound and a newly commissioned score in this exclusive interview with its star, Gerard McCarthy, who plays every character from the novel including Jonathan Harker and Dracula…

Damian Michael Barcroft: Fans of Dracula have read the book, watched countless film and television adaptations over the years and possibly even seen the odd stage version or two. How do you keep the story fresh for a new audience?

Gerard McCarthy: Oddly enough, we’ve kept it fresh by going right back to the original text and not messing with it. Dracula is not sexy & sparkly, we’ve not set it in 2014, there are no gimmicks or slants on it. It is a 100% truthful and honest retelling of Bram Stoker’s story which I personally don’t think can be bettered.

Damian: Perhaps the most iconic screen interpretations of Dracula are the films featuring Bela Lugosi and Christopher Lee but we’ve also seen some other interesting performances such as those by Lon Chaney Jr, John Carradine, Jack Palance, Louis Jourdan, Frank Langella and, of course, Gary Oldman. More recent incarnations include Marc Warren and Jonathan Rhys Meyers. I’m wondering which of these performances you personally admire and to what extent they may have influenced your own interpretation of the role?

Gerard: I’ve seen them all, some with my director, and a lot by myself! Our “Drac-Stack” of research DVDs is now very impressive. I suppose it’s inevitable that every actor will bring their own individual energy and interpretation to the role, and although it has been useful to watch so many great actors portray Dracula, I probably have the most admiration for Gary Oldman’s portrayal because it is so true to Bram Stoker’s description of The Count.

Damian: The character of Dracula means different things to different people from the child-friendly Halloween costume cliche to more wider readings of the text incorporating almost everything from Marxist metaphor to Freudian preoccupations. However, arguably the three most significant aspects of the character are embodied by the performances of Lugosi (foreign aristocrat), Lee (overtly sexual and dangerous) and Oldman(animalistic and romanticized passion) – which of these elements do you consider to be indicative of your Dracula?

Gerard: As the novel is made up of various characters’ journals and their own account of what happened, they each witness very different elements of Dracula’s personality. Of course he’s very charismatic with Jonathan as he’s absorbing all the information about London and learning about Carfax, but that’s certainly not the same guy that Lucy encounters in Whitby, or convinces Renfield to invite him into the asylum! He’s manipulative, highly intelligent and ruthless. He snatches and murders babies. So that, to me, is the most important thing to remember here, this “man” is the absolute embodiment of evil. He is every single threat to mankind rolled into one, every serial killer, every terrorist organisation. He has the capacity and the intention to completely destroy humanity as we know it and to lead a race which he has created.

Damian: I’d like to turn our attention to the often neglected character of Jonathan Harker which you also play. In addition to Dracula, the other more theatrical characters –certainly those in which writers and actors have had the most fun characterizing– are those of Renfield and Van Helsing. For me at least, Harker is possibly the least interesting of Stoker’s characters so I’m wondering how you intend to make him appealing?

Gerard: I suppose the main challenge of playing Jonathan is that he is so naive. He doesn’t know what a vampire is, he doesn’t know why he only sees Dracula at night time or why he doesn’t have a reflection so the audience is already streets ahead of him! This doesn’t make him stupid, he’s certainly not that, so it’s important to watch him gradually put all the pieces of the jigsaw together and to remember that this is all new to him. Jonathan is actually my favourite character to play because he grows throughout the play, he gets stronger and braver and towards the finale finds the strength to do things that he would never have done at the beginning. I guess, in a way, he has as much of a metamorphosis as Dracula. 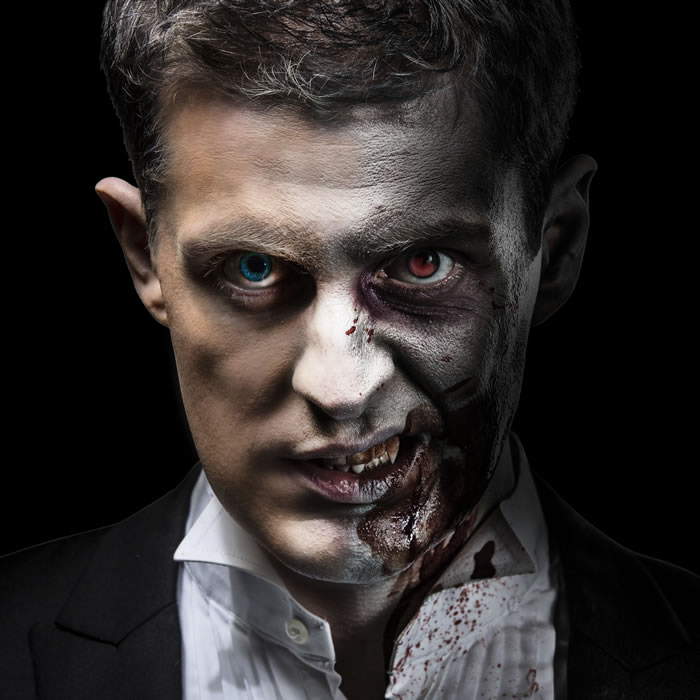 Damian: One interpretation of Harker might be that he represents the straight-laced Victorian gentleman and their fear of sex and female empowerment. How does the vision of Victorian patriarchal society that is represented in the book translate to your version, which presumably, eliminates the female characters?

Gerard: No, they’re all there. It would be impossible to give a true retelling of the story and eliminate the females, so I do play Mina and Lucy as well. Mina is, after all, the driving force behind the chase back to Transylvania. It would be ludicrous to cut them.

Damian: How do the multiple cameras and back screen projections complement the story and indeed your performance?

Gerard: Michael Poynor, the director, didn’t want to ignore the fact that the story was predominantly told through the medium of film, and it allows us to convey huge chunks of the novel very quickly. The audience doesn’t have to listen to Jonathan describe the Castle for five minutes if they get to see it at the same time as he does. The screens act as his eyes, and through the projections they get to see exactly what he does. I have to say, it’s very clever, but then that’s exactly why I wanted Michael to direct me in this. He lives and breathes theatre and what he’s capable of creating is the closest thing to magic that I’ve ever seen.

Damian: I believe that the sound design and specially commissioned music score also play a vital role in the production?

Gerard: Yes, Mark Dougherty’s score adds so much to the storytelling. It sets the tone and atmosphere for every scene before I even open my mouth. He’s a very talented and accomplished composer and I’m delighted that I’m getting to work with him so closely on this project. He’s someone I’ve admired and respected for a long time.

Damian: Thank you very much indeed.

Gerard: Thank you! Hopefully see you and all the other Dracula fanatics at a show, I’m sure we’ll do you proud.