DAMIAN: Hi Charlotte and thanks for doing this. Can you tell us a little bit about what made you want to be a costume designer please?

CHARLOTTE: Hi Damian, I left art college with a degree in knitwear from Central Saint Martins and after a brief stint working in the fashion industry I decided to change my career into costume design. It suits me better as I prefer creating varied looks which depict a time in society showing a person’s class, a historic time or a feeling of emotion. Fashion is creatively far more narrow and restricted by sales.

DAMIAN: Even early on in your career you worked on some iconic television shows such as AGATHA CHRISTIE’S POIROT, TORCHWOOD and DOCTOR WHO including arguably one of the best written by Steven Moffat, BLINK, which featured the first appearance of the Weeping Angles and an early screen role for Carey Mulligan. What would you say you learned most from those early experiences in the industry?

CHARLOTTE: Wow you have done your research and yes I’ve done my time! I am lucky to have gained so much valuable knowledge from the incredible shows I have worked on. I started out working my way up in the costume department, I wanted to get a broad brush stroke of information on how to design and work with incredible talent and challenging scripts. I assisted some amazing designers who are credited for the above shows and their knowledge is invaluable. I learnt you should always listen and absorb what is wanted, then you can take that information and push it further. Working under someone with great experience teaches you that.

DAMIAN: And you worked on another Steven Moffat production some may have heard of, the original pilot for something called SHERLOCK! What was that like in the days before anyone had any idea that SHERLOCK, or indeed Benedict Cumberbatch, would become such a phenomenon?

CHARLOTTE: It was great fun! We all new it was going to be special it had the Steven Moffat and Mark Gatiss touch. Establishing the new characters in a modern world was a challenge and finally lead us to the ‘the Sherlock coat’. I hope you haven’t missed the red button holes, I painstakingly sewed them on the original myself, but I’m sure there have been many remakes of that coat since!

DAMIAN: In compiling these questions, I thought a lot about the costume designers and their films that have had an impact on me over the years such as THE MALTESE FALCON and CASABLANCA (1941 & 1942: both by Orry-Kelly), VERTIGO (1958: Edith Head), BONNIE AND CLYDE (1967: Theadora Van Runkle), BLADE RUNNER (1982: Michael Kaplan), BATMAN (1989: Bob Ringwood) and BRAM STOKER’S DRACULA (1992: Eiko Ishioka). What cinema or television would you say has inspired you most over the years?

CHARLOTTE: I am constantly inspired. I wouldn’t say I have been inspired more or less by any one production. It depends on what suits the story I am working on and how the director wants to shoot it. I feel I am most inspired by real life looking at a person’s social background, their job and age without stereotyping, it’s weirdly harder than you think. Also colour is so important to me and how it works in its environment so for this I admire Wes Anderson and Almodovar, and even Hitchcock, but this then becomes highly stylised so it’s what you take away from their films. 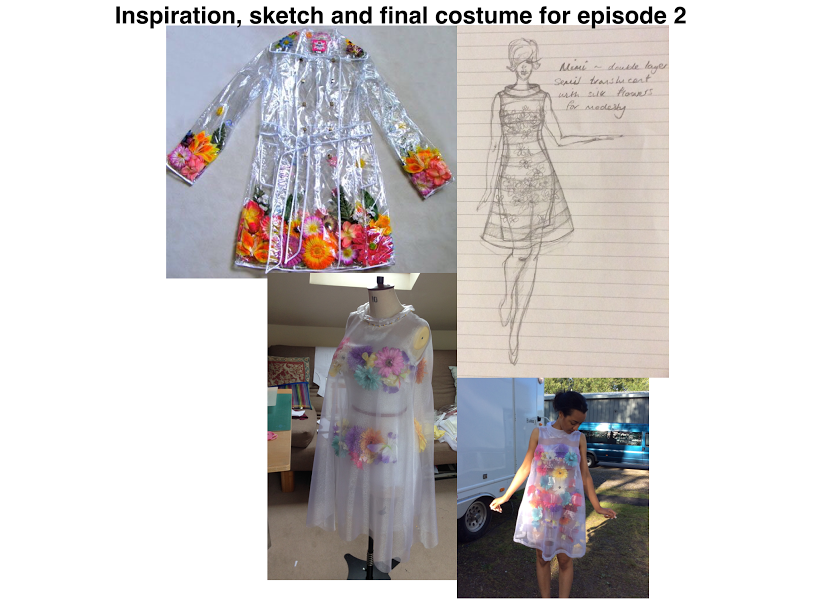 DAMIAN: How many of the costumes for ENDEAVOUR are off the peg and how many are specifically tailor-made for individual actors?

CHARLOTTE: For the main cast they are made. Each one of the suits for our detectives are tailor made by an incredible tailor I know. He is in his 70’s and made suits in the 60’s so still has all the original blocks to use for his pattern. I tweak some of them to help flatter the modern body but on the whole they are as they would have been made. For the background and guest cast I buy from vintage shops and hire from numerous specialist costume companies. Sometimes I can’t find the perfect thing so I have something made.

DAMIAN: In the cases where the clothes are designed and made by you, is it a problem finding the accurate and authentic materials for the period?

CHARLOTTE: Most fabrics now are breathable which is a good thing. Back in the 60’s there was a lot of nylon and most of my actors don’t like wearing it, so I find authentic looking fabrics, but tend to stay away from the real thing. I am a great believer in also using modern clothes and remodelling them or styling them to look correct. There are so many clothes in the shops which give the correct 60s feel and yet aren’t falling apart like a vintage piece might be! In episode 1 Tessa Knight’s denim coat is from a high street shop. It looks fresh like it should. As if she’s just bought it. Finding the perfect original coat for her didn’t work, they all looked to ‘period’, they looked like a costume where as the denim coat looks real.

DAMIAN: How do you approach researching the period and how long might this take per episode or series?

CHARLOTTE: It starts off with a discussion on the tone the director wants to give the episode. Is it going to be colourful? Is it going to be worn in? Is it going to be super polished? Then I start looking at old fashion stills to pull out key silhouettes for each character. I will then reference photography, film and art, and to make sure it’s real, look back at archive footage from the same time. To be honest it’s constant research, as I am always getting new ideas which send me down new interesting paths. 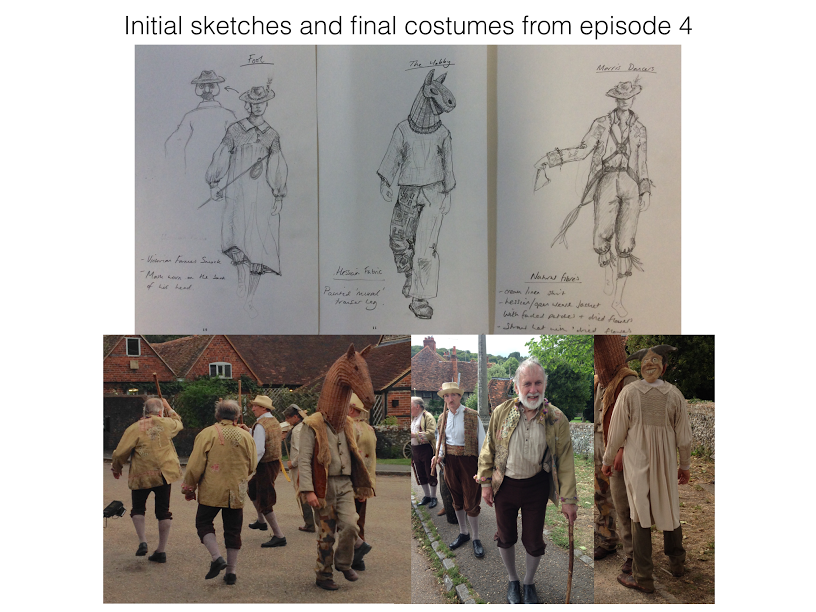 DAMIAN: In addition to the research, to what extent do you think your own personal tastes and styles have an influence on what we eventually see the actors wearing onscreen?

CHARLOTTE: Yes my own tastes definitely influence what you see. I like everyone on screen to work well together from the background to the main artists so I consider what colour costume will sit well with what. I prefer clean lines and less fuss over frills and pattern. Then if I do use anything more fussy it’s always against a neutral or clean silhouette. Haha, my own style is very simple lines and minimal pattern so yes.

DAMIAN: Would you say you spend the most time collaborating with the writer, Russell Lewis, the directors or the actors in terms of making creative decisions?

CHARLOTTE: It works as a joint collaboration but it is in this order: director, actors , Russ. Haha. Basically Russ has final say, but he is always very easy to please!

DAMIAN: Can it ever be frustrating that hair and makeup is a different department in that it prevents creative control over the complete visual design of characters?

CHARLOTTE: No it’s good to have that separation. Myself and makeup discuss where I am going with the costume and then makeup take it from there. I love seeing what makeup bring to the character and sometimes I make more changes once I see the end result. It’s all an organic process.

DAMIAN: If we didn’t know Endeavour as well as we do, and instead simply observed him from a distance, what do you think we could be able to learn from his clothes and the way in which Shaun Evans wears them?

CHARLOTTE: He’s an old man trapped in a young person’s body so there is a correctness about him. He is very rarely seen without a tie, so when he is it makes a subconscious impact on the audience. However he’s not vain, he is practical. 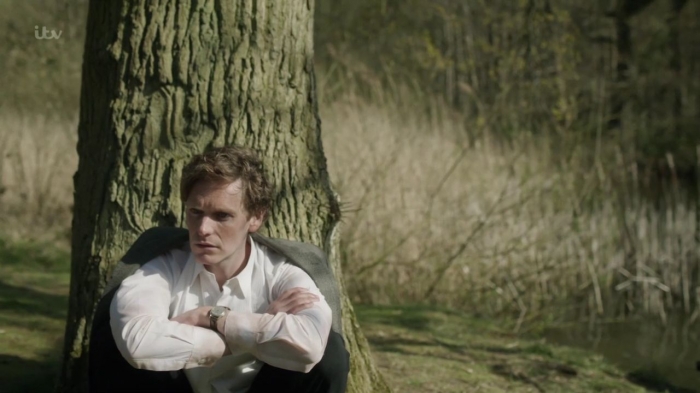 DAMIAN: Personally, I like the look of Thursday best with his great coat and fedora. Where is his hat actually from?

CHARLOTTE: Thursday has two hats. One is new and very beautiful but I don’t think it has the 60s look and the other is a beautiful slightly more beaten original. We used the original one in series 4 which came from a vintage shop. It has a narrower brim and a slightly higher crown. It’s actually late 50’s early 60’s as is Thursdays style, so I like that it looks a bit more faded. You have hit the nail on the head the newer one from series 3 looks like a fedora with the wider brim not a trilby… now I’m just being pedantic! 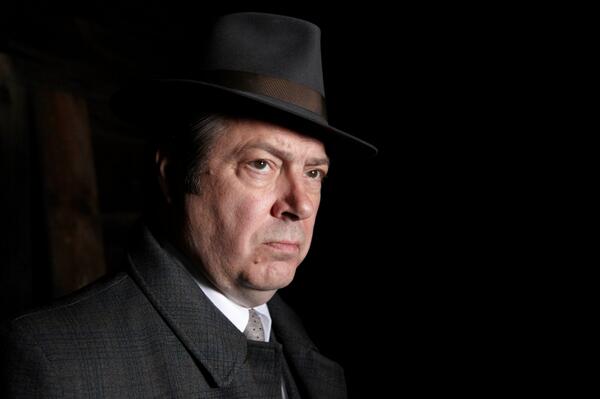 DAMIAN: And Jim Strange, is it fair to say he’s a bit drab and frumpish before his time?

CHARLOTTE: Absolutely! He’s heading towards the Jim Strange of the 1980s Morse with his thick rim glasses. He’s a bit crumpled and his suit is ill fitting. I love that he wears a tank top what ever the weather. 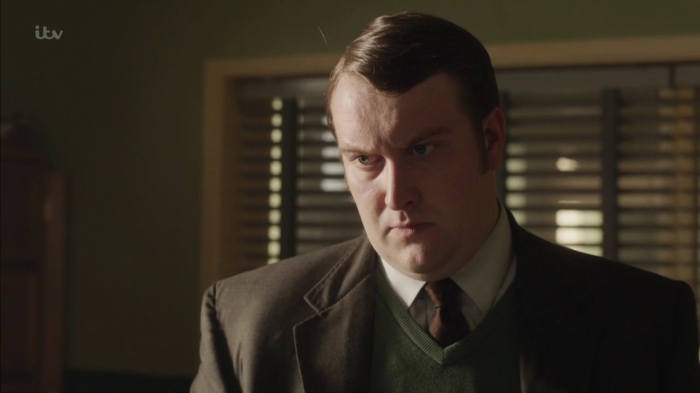 DAMIAN: James Bradshaw is so wonderfully eccentric as Dr Max deBryn, you must have enormous fun with his character?

CHARLOTTE: He’s fab isn’t he? When you have such a male heavy cast all wearing suits it’s hard to make a different look for each one, so his eccentricity helps me. He has an old fashioned style making poor James look many years older than he is with his button thru cardigans and his bow ties. 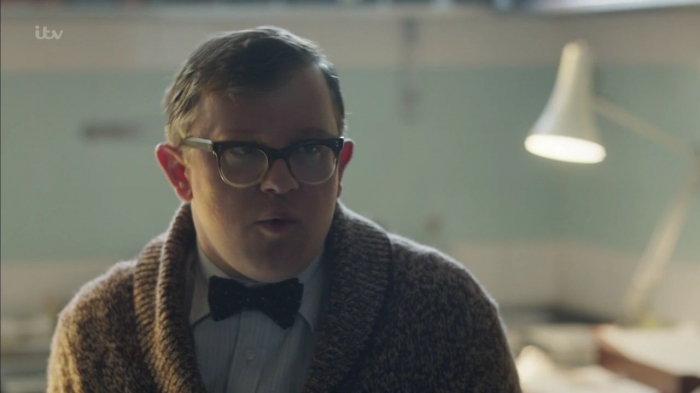 DAMIAN: We’ve yet to see Chief Superintendent Bright relaxing at home, what do you imagine he’d be wearing?

CHARLOTTE: It has been designed. He is a more tidy version of Max deBryn. He would always wear a bow tie too. 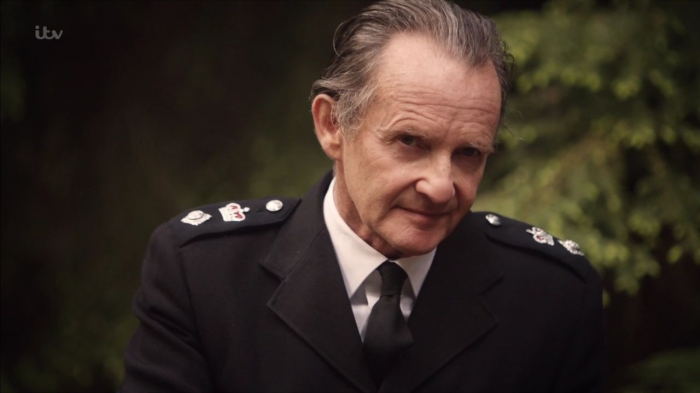 DAMIAN: How would you describe Dorothea’s look?

CHARLOTTE: Abigail has the most amazing figure! She is wonderful to dress. She has to show an element of power dressing yet she is still an attractive woman. In the 60’s women would been look down on if they didn’t wear skirts in the office, and even though she is the boss so could flaunt these rules there are standards she likes to keep up! She has a silhouette of the early 60’s due to her age and formality which is a joy to design. 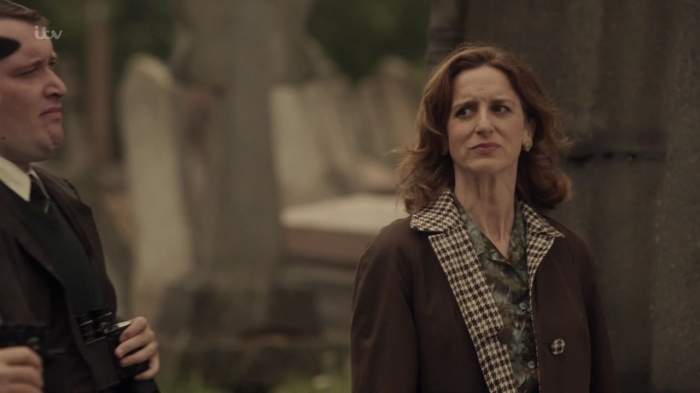 DAMIAN: Which of all the characters in ENDEAVOUR do you find the most challenging to design for?

CHARLOTTE: Usually the guest characters as you never know what you are going to get.

DAMIAN: And finally, if we look at the BAFTA winners for film costume designs in the last decade: MAD MAX (Jenny Beavan), THE GRAND BUDAPEST HOTEL (Milena Canonero), THE GREAT GATSBY (Catherine Martin), ANNA KARENINA (Jacqueline Durran), THE ARTIST (Mark Bridges), ALICE IN WONDERLAND (Colleen Atwood), THE YOUNG VICTORIA (Sandy Powell), THE DUCHESS (Michael O’Conner), LA VIE EN ROSE (Marit Allen), I think it’s fair to say that these are indicative of voting trends within the academy which clearly favour period or fantasy productions. And yet, I can’t help feel that in a way, isn’t creating ordinary, everyday costume designs for productions with contemporary and more mundane settings equally, if not more difficult, particularly in order to avoid clichés and stereotypes?

CHARLOTTE: Yes, yes! Everyone has an opinion on the modern and mundane. There’s many more voices to convince. Those designers you mention also do the mundane and achieve great results too but it is not acknowledged in the same way. In fact it was whilst I was pulling costumes from the costume hire company for ENDEAVOUR I came across Michael O’Conner competing for the same items. Whether you are on a TV show or large feature film we are all fighting together over the same items! It’s great fun who you find at the costume houses. 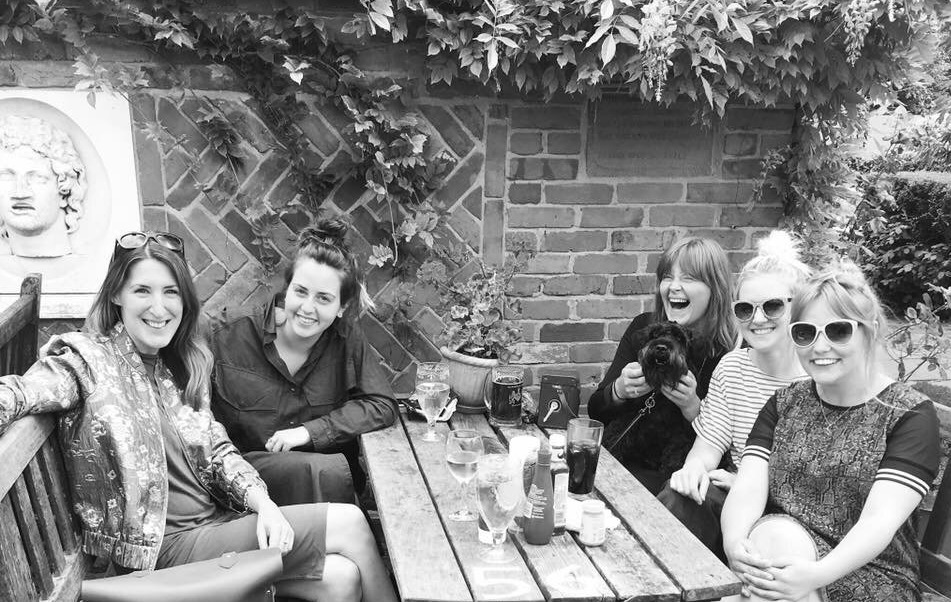 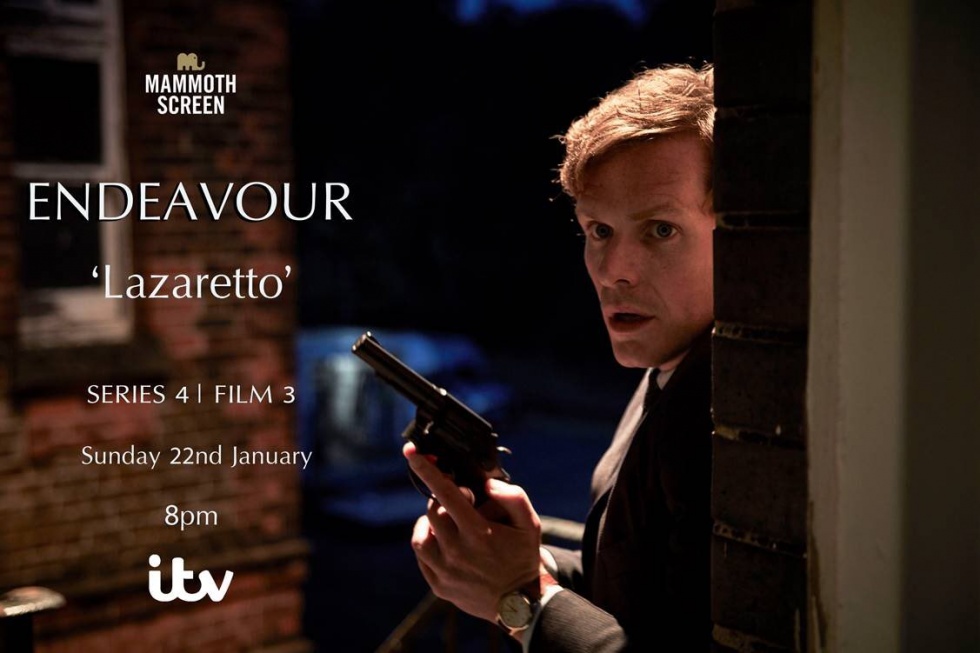