The Home Office was appalled and said that women were not proper persons in the eyes of the law when Edith Smith became the first female police officer with official powers of arrest in 1915. However, by 1920, and after The Sex Disqualification (Removal) Act of 1919, the Baird Committee stated that women could indeed be appointed as police officers although this came with the caveat that their duties be confined to dealing with women and children only.

The conditions in which female officers work, and the respect and recognition afforded to them, have obviously changed for the better over the years but progress has been frustratingly slow and much still needs to be done to increase awareness and understanding of the issues affecting women within the police force today.

There were 2,500 women police officers across the UK in 1960, the marriage bar (women had to leave the profession if they married) was lifted towards the end of the decade and women were finally given the opportunity of carrying out the same duties as men. However, in 1968 (the year in which the fifth series of Endeavour takes place) there were only 14 female officers working in Oxford City Police compared to 276 male officers. These figures rose when the amalgamation occurred later that same year and became Thames Valley Constabulary which covered Berkshire, Buckinghamshire and Oxfordshire, but in one of the largest territorial police forces in England which employed 2305 officers, just 126 were women.

While the British Association of Women in Policing continues its equality campaign for female police officers across the UK in which women make up 51% of the population, it has been estimated in recent years that only 27.9% of today’s entire police force are actually female.

RINGLEADER, TOM-BOY, AND CHUM TO THE WEAK 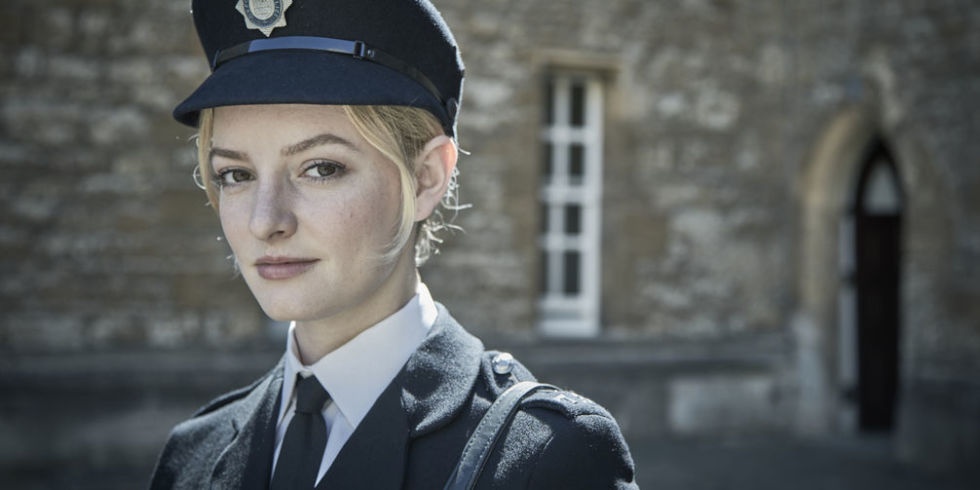 DAMIAN: I donʼt know if you were familiar with Inspector Morse, Lewis or Colin Dexterʼs novels on which they were based but what was your initial reaction to being offered the part of WPC Shirley Trewlove?

DAKOTA: When I first auditioned for Endeavour I was sent an episode to read in which Trewlove had only four lines. I was promised that the character would grow and develop into ‘one of the gang’ as the series went on and given a vague outline of what that might entail, but the truth is I was going in blind. I didn’t know anything about the character – what sort of a person she was, where she came from or where she might end up. But I had seen the first two seasons of the show and was struck by the high production values and the wonderful acting of the regular characters so I figured I ought to put my trust in the team behind it and hope for the best. I suppose you could call it a leap of faith. It was daunting, of course, joining a cast so well established but everyone was so welcoming that I soon felt at home on set.

DAMIAN: The writer, Russell Lewis, has told me in previous interviews that Trewloveʼs creation owes a little something to the female police officers depicted in Carry on Constable, Joyce Grenfellʼs PW Sgt. Ruby Gates in the St. Trinianʼs series, Shirley Eaton in many British films from the period in which she played cool, capable and resourceful characters such as Nurse Denton in Carry on Nurse and he wondered what might happen with those kind of characters if he wrote the part straight rather than for laughs. Other inspirations include Sue Lloyd as Jean Courtney in The Ipcress File and John Betjemanʼs poem Myfanwy. Did you ever discuss these influences with Russ at any point?

DAKOTA: Sadly Russell never shared his influences with me. Trewlove was something I had to figure out on my own.

DAMIAN: How did you go about researching your character given that there were so few women police officers during the sixties?

DAKOTA: It was tricky. As you say, there weren’t many women in the police force which gave me relatively little to work with and what I could find about them was usually just statistics. No first hand accounts. I read a lot about the sort of jobs women were typically given; usually the ones seen to be too sensitive for the male officers, such as breaking bad news or dealing with victims, particularly cases involving children or sexual assault. Trewlove is actually involved in the investigative work a lot more than most women would have been allowed to be at that time. With that being said, I can appreciate how it feels to work in a field where you are treated very differently to your male counterparts. 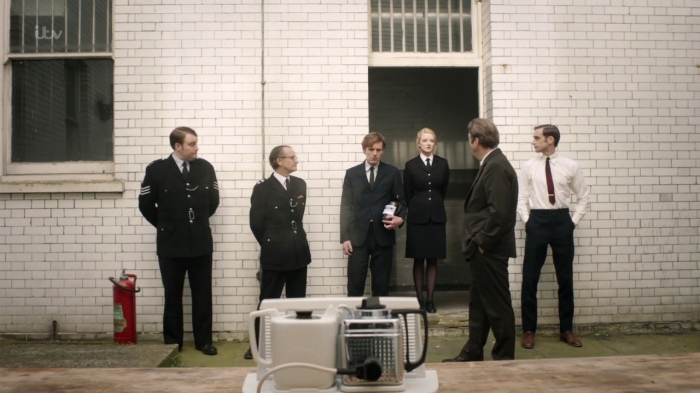 DAMIAN: How do you think the show deals with issues of gender inequality and what do Trewloveʼs storylines or character arc reveal about this struggle?

DAKOTA: I think the show, for the most part, steers clear of tackling this issue head on. On the whole, the men around her treat her with the respect her hard work earns her. It goes without saying that Trewlove’s career trajectory will be different to that of her peers, but that doesn’t deter her from getting involved (as much as possible) and from striving to be her best self. She rarely lets anybody see how affected she is by the pressures of working in a male-dominated environment, but there is a lovely moment this season where she empathises with Fancy when he claims he feels overlooked. There are occasions in this series where guest characters attempt to patronise or harass her but she takes it all in her stride – she can feel that times are changing and as Endeavour tells Fancy in Film 1 ‘She doesn’t suffer fools.’

DAMIAN: Letʼs talk about your thoughts on some of the other characters. For someone who is essentially a loner, Endeavour certainly has his fair share of female admirers. What do you think makes him so attractive to women?

DAKOTA: I think to a greater or lesser extent we all want what we can’t have. Endeavour may be intelligent, principled, witty and very occasionally charming but he is also emotionally unavailable and that is a real draw for a lot of people. And those cheekbones certainly don’t do him any damage. 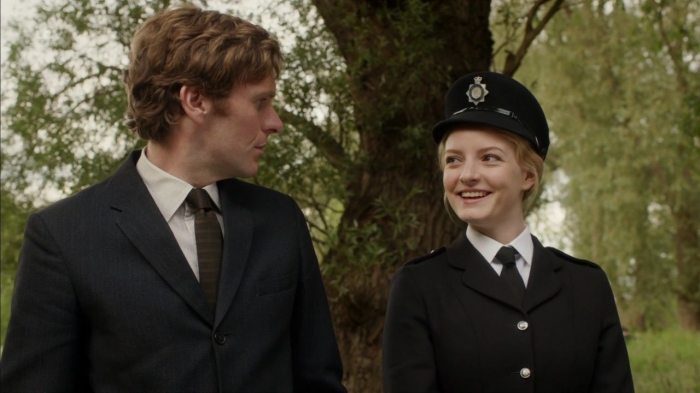 DAMIAN: Trewlove is attracted to him as well isnʼt she?

DAKOTA: Naturally – it’s a rule on the show that everyone is attracted to Endeavour. Trewlove connects with Endeavour on an intellectual level that I think is quite rare. She has a lot of respect for him and harbours a deep desire to impress him. I think to an extent she sees him as another puzzle – something to be figured out. But she can also be quite playful with him, she’s one of the only characters that dares tease him.

DAMIAN: As you say, certainly on an intellectual and cultural level, wouldnʼt Trewlove and Endeavour make a perfect couple?

DAKOTA: I think so. But Trewlove isn’t going to waste her time waiting for him to realise that. Endeavour is his own worst enemy when it comes to romance; he’s allowed himself to become so obsessed with chasing something he can’t have that he’s blinded himself to everything and everyone else. He has a few affairs this season but they’re short lived and he never really allows himself to be fully present. Trewlove is a little more pragmatic in her approach to romance; if you want love just pick somebody and love them. Endeavour may come to realise what he could have had with Trewlove, but, as with all great love stories, it’ll likely be tragically too late.

DAMIAN: For me, one of the lovely surprises of the show has been the way in which the bond between Trewlove and Bright seems to grow with each new series but how would you describe their relationship?

DAKOTA: I love Trewlove’s relationship with Bright. He’s always looked out for her and given her encouragement and she returns the favour in his moments of vulnerability. She looks up to him as a sort of father figure. I always imagined that Trewlove had lost someone she cared for and perhaps Bright goes some way to filling the gap that was left. 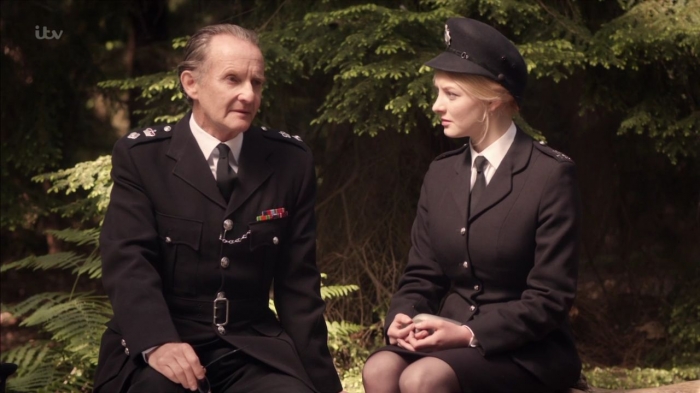 DAMIAN: Thereʼs a beautiful scene in PREY in which Bright tells Trewlove the story about him killing the man-eating tiger of Kot Kindri but that he failed to save the life of a fellow officer. Thereʼs another moment which I loved when theyʼre hunting the tiger in Oxford and he says “If we should encounter anything, you stay by me, yes?” which highlights his almost fatherly relationship with her. And yet, in the script for LAZARETTO (Blue Amendments) where Trewlove visits Bright in hospital she says, “Itʼs alright, sir. I wonʼt leave you. You just get some sleep. Iʼll be right here”, and a particularly revealing line in the description that reads: “TREWLOVE settles into a chair [next to his bed]… A tigress minding her cub.” Now, this actually made me look at the relationship from a different perspective because I originally thought of it as Bright mentoring Trewlove but couldnʼt it also quite easily be the case that it is he who actually needs her?

DAKOTA: There comes a time in every parent/child relationship when the cared for becomes the carer and vice versa. It’s nice to see Trewlove return the favour. 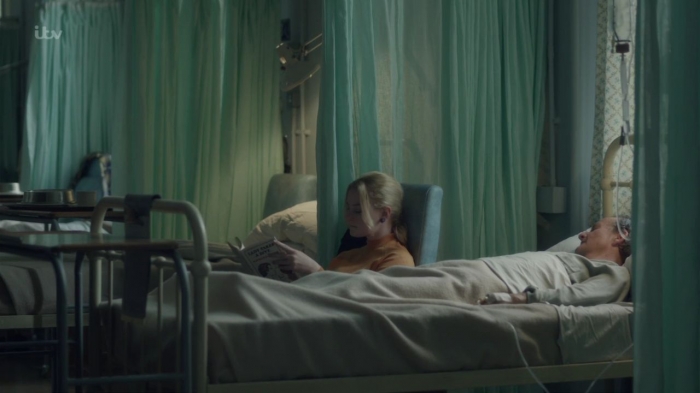 DAMIAN: As I often say, the cast is exceptionable and one of the finest ensembles on British television, but what is it like working with an actor of such gravitas as Anton Lesser?

DAKOTA: Anton is one of the world’s better people. The ideal combination of talent, humour, professionalism and gentility. He never fails to delight me and is always the best part of my day. Working with him has truly been a joy and an honour. 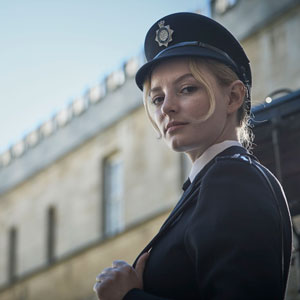 Very special thanks to the British Association of Women in Policing and especially Professor Louise A. Jackson of the School of History, Classics & Archaeology at the University of Edinburgh and author of Women Police: Gender, Welfare and Surveillance in the Twentieth Century for their generous time and assistance with the information which proceeds this interview.