Please note that this interview was originally published prior to the broadcast of Endeavour: Nocturne (S2:02) on April 6, 2014.

~ With thanks to Rex De Lincto ~

Last week we discussed FIRST BUS TO WOODSTOCK with the writer and executive producer of Endeavour, Russell Lewis. Today, we begin our journey through the first series as well as previewing tonight’s episode – NOCTURNE…

(The soft centre with a touch of the chase me Charlies)

DAMIAN: FIRST BUS TO WOODSTOCK was a stunning piece of television which exceeded all expectations and must have been a huge challenge to follow, particularly when one considers that it was never actually intended as a pilot but rather a one-off tribute and 25th anniversary celebration of the original Inspector Morse. You have previously said that had you been aiming at a series, you probably would have done a few things differently. Could you give us a few examples Russ?

RUSS: Compare and contrast GIRL and FBTW. And, I think most of the answers are there… With GIRL, we were – apart from Shaun [Evans] and Roger [Allam], Jimmy Bradshaw and Abigail Thaw – starting over. Essentially, if FBTW had been the pilot for something, I would have set up the returning ensemble. STRANGE, most obviously. And the THURSDAYS. Truth is the THURSDAYS did exist in early drafts of FBTW. But it was so packed out already with story that – much to my chagrin – they were excised. Mothballed, as it turned out. I did try AGAIN – to get them into GIRL, but again… my designs were thwarted (for the best of reasons.) However, they found their moment and added considerable value to FUGUE. So – every thing in its season. Looking back now – it feels to me as if they have always been part of the fabric of ENDEAVOUR, even if they were off-stage for the first two adventures. 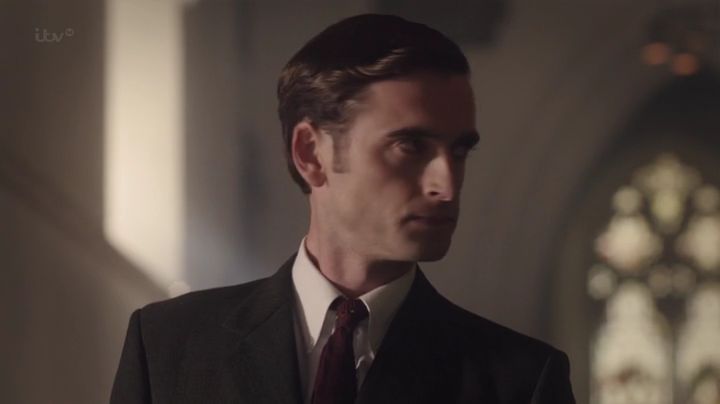 And one mustn’t forget DS JAKES, of course. A permanent stone in Endeavour’s shoe. I’m enormously fond of JAKES. His role as antagonist in chief was filled in FBTW, admirably, by the marvellous Danny Webb as DS Arthur LOTT. His relationship with Endeavour is constantly evolving. I mean, he’s got the rank and probably feels he should have landed the job as Thursday’s bag-man. So, that’s always a bit of a sore point between him and Endeavour. And yet, I think, even in the first series, he’d started to if not admire, then perhaps respect Endeavour’s abilities. Of course, a huge amount of JAKES’s appeal is down to Jack Laskey, who brings so much to the role. It would have been easy just to play the snide, but in Jack’s more than capable hands, Peter Jakes gives us so much more.

And, completing the Cowley Road nick line up, dear old Reginald BRIGHT – who took over from the unfortunate CRISP. I wanted to have a man in uniform at the top – to ring the changes from D.Ch.Supt.Strange and, in LEWIS, Jean Innocent.

DAMIAN: GIRL serves as an excellent set-up which not only re-establishes Morse for the casual viewer but also introduces new characters including an old friend and another great original creation in the aforementioned Chief Superintendent Reginald Bright who we’ll discuss again shortly. Before that however, can you tell us a little bit about PC Strange and why he missed the “First Bus”?

RUSS: Well – we had a fairly dense story to unpack. The key relationship that needed to be brought foreground was between Endeavour and Fred Thursday. There simply wasn’t room to introduce Strange and do him the justice he deserved. No dark agenda. Nothing… sinister. We are always up against it for screen-time, running, as we do – some twelve minutes shorter than the original IM [Inspector Morse]. 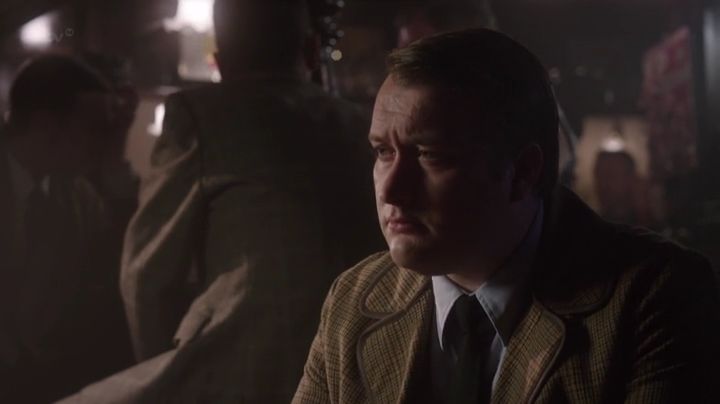 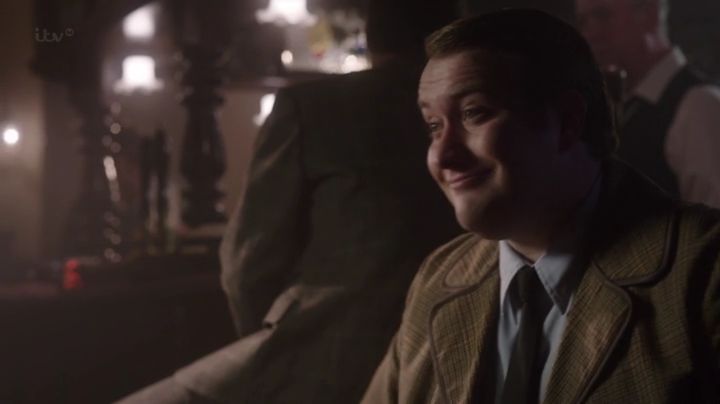 …but he made it “second time around!” ©itv/MammothScreen

DAMIAN: It was a beautiful homage to James Grout, the gentleman who played Strange in the original series that you gave the new incarnation the Christian name Jim. Mr Grout passed away in 2012 but he appeared in your adaptation of The Way Through the Woods and I’m wondering if you ever had the chance to meet the great man and if you could tell us a little a bit about him please?

RUSS: Well – James Grout was known generally as Jimmy. I met him briefly on location at Leith Hil – which doubled for Wytham Woods – in TWTTW [The Way Through the Woods]. And had admired his work hugely – not only in Morse, but across a raft of memorable performances. The luckless George Batt in Mother Love springs most readily to mind. Strange – in the persona of Jimmy Grout – for all his grouching at Morse, there was always a certain kindness, a genuine affection, in their relationship. He had very kindly eyes, did Mister Grout. So… 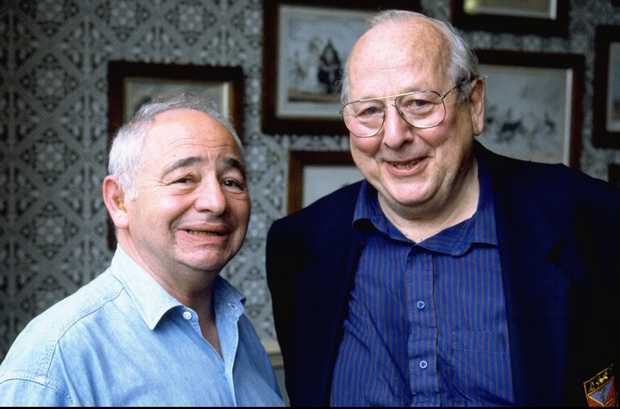 Giving the unnamed Strange the forename of James Grout seemed a way to commemorate his enormous contribution to IM. It was doubly fortunate, as my son is also called James, and, if I’m in on the ground floor of something – creating it – I usually try to name a major character – typically someone with a kind nature and generous heart – after my own sprig, who has an abundance of said qualities. Thus, James Kavangh QC… and in the Morse universe, James Hathaway. That I was able to combine both in the person of Jim Strange was very pleasing.

But casting STRANGE was a tall order. And then we saw Sean Rigby – who was either just leaving, or had just left, drama college – and he blew us away. I mean, he just WAS Strange. Matey-ing away as if to the manner born. And we knew at once we’d found our man. That was the last bit of the jigsaw.

DAMIAN: I’d now like to discuss a horse of a very different colour and perhaps you might also tell us more about the Viscount Montgomery of Alamein inspiration?

RUSS: Ah… BRIGHT. Well, it was the voice and bearing, really. Here was this military giant, and yet to look at him, and hear him addressing the troops – the little foxy moustache, the rhotacism… And yet for all that, a brilliant commander who inspired great loyalty and devotion. So, that was the jumping off point. Anton Lesser (I still have to pinch myself at our good fortune that he agreed to take on the role) just fills those shoes to perfection. 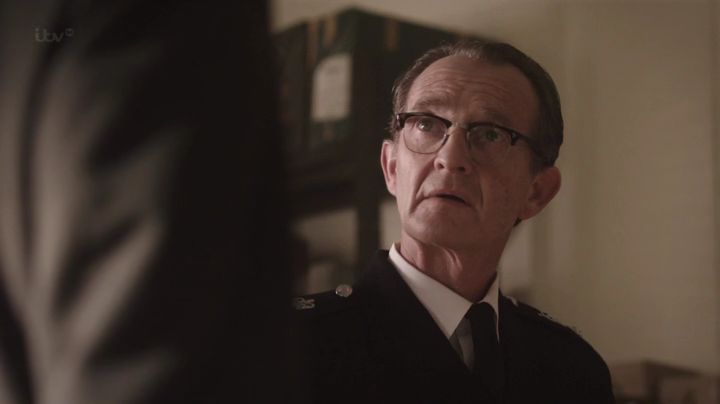 I remember Anton was quite concerned that Bright shouldn’t be just a figure of fun, easy to ridicule. He was certainly very easy to read as that on the page, and I think that there was a general buzz in pre-production, because he has a certain way of speaking, a predilection for tortured and tortuous idiom, that he was just a buffoon. But to my mind – going back to Monty – nothing could be further from the truth. I think I either wrote, or spoke to Anton – wrote, I think – to outline my take on the character, which was at odds with that initial received impression of him. People might mistake him for a bit of chump – and to a certain degree he plays into his detractors’ hands with his demeanour – but, for my money, he was anything but a fool. He may be a stickler for the rule-book, but beneath that rather large hat, is steel and flint, all the way down.

Bright has come – as I think is alluded to in some of his dialogue – from the Colonial Police, and has spent most of his career ‘overseas’. I think that dictates in some part his attitude to the men. He is still applying the lessons learnt in the tropics – a certain ‘Empire’ way of dealing with ‘local officers’ and indigenous peoples – to the good folk of Oxford. His is a world – his younger days at least – straight out of John Betjeman’s A Subaltern’s Love Song. ‘Six o’clock news… lime juice and gin.’ The second son. Packed off to ‘foreign climes’ to make his way in the world, and do his bit for King and Country. He is a man even more out of time than most in the 1960s. But, he is a very decent man, if a little dazzled by those he perceives as his social betters. When the chips are down, his loyalty to his troops – for all his bark and bite – is total.

DAMIAN: There is a reference to Charlie Hillian (played by Maurice Bush in Inspector Morse) in Girl – might we hear more of him in the future?

RUSS: I think it very unlikely that we will not hear, and see, more of Mister Hillian.

DAMIAN: Speaking of the future and specifically this evening, please tell us something about tonight’s film, NOCTURNE…

RUSS: High summer. A certain sporting event. 1966 was the year of Dr. Jonathan Miller’s masterly interpretation of Alice in Wonderland for the BBC. A favourite. Eerie. Unsettling. Haunting.

So the mood of that piece of work was a vague, uncertain point of departure. One thought begets another. Deborah Kerr and Tippi Hedren drop by to say hello. A snake of choristers sing their way along a sun dazzled beach. The cover of an old Long Playing Record sets hares running hither and yon. A West Country summer long since passed casts a long shadow. Frederic Chopin does his thing. And before you know it… NOCTURNE swims into view. 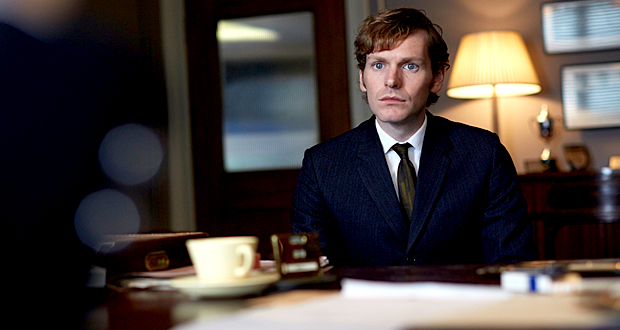 Each week we’ll be looking at what information we can glean from each of the Endeavour films concerning significant events and encounters and how they relate to the original series. Today, we continue our study of Girl…

Morse isn’t much of a team player. His school reports always stated that he was bad at games. However, he was good at Cross Country or anything where he could compete alone. Girl

Morse is described as having a grammar scholarship and a failed degree. Girl

Morse states that he was a cipher clerk in the Royal Signal Corps. First Bus to Woodstock & Girl

While serving in the Signal Corps, Morse’s training took place in Leicestershire. Girl

Bright tells Thursday that Morse worked about two years in uniform before being transferred to CID. He also complains that Morse is acting as Thursday’s bag-man, a job that should have gone to a Detective Sergeant rather than a Detective Constable. Girl

Morse and Jim Strange meet for the first time marking the beginning of possibly Morse’s longest friendship which lasted 35 years until Morse’s death in 2000. Girl

Strange is already thinking about promotion and tells Morse he doesn’t want to spend the rest of his life in blue serge. Girl

Morse bids farewell to Pamela and her son Bobby as they board a coach. Their destination is not stated but one of the services runs to Newcastle as advertised on one of the boards behind them. Girl

Morse and Chief Inspector Dawson worked as detective sergeants under the command of Charlie Hillian in 1969*. Second Time Around

*Hillian is mentioned by Thursday in Girl: “I know you’ve already spoken to DI Hillian out of Kidlington about the robbery”.

Mary Lapsley, an eight-year-old girl is murdered in 1973. Morse, Patrick Dawson and Charlie Hillian worked on the case which wouldn’t be truly solved until eighteen years later in 1991. Second Time Around

A celebration is held for former assistant police commissioner Charlie Hillian. Morse’s old rival, Chief Inspector Patrick Dawson (who you’ll remember were together when Hillian was a chief inspector in Oxford) leads the proceedings. Hillian later dies from a head injury, the truth about the Mary Lapsley case and indeed Dawson are finally revealed after 18 years. Second Time Around 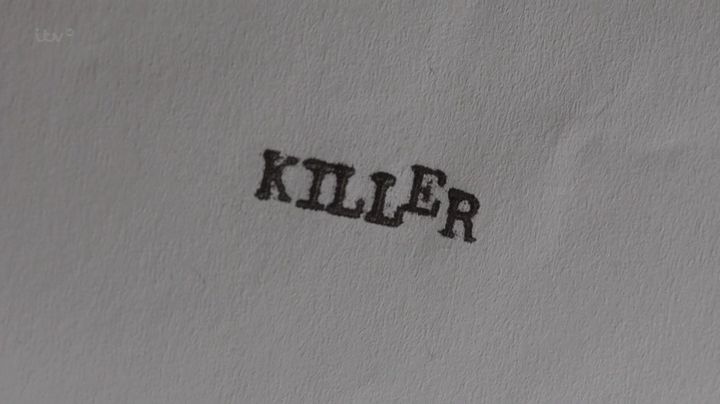